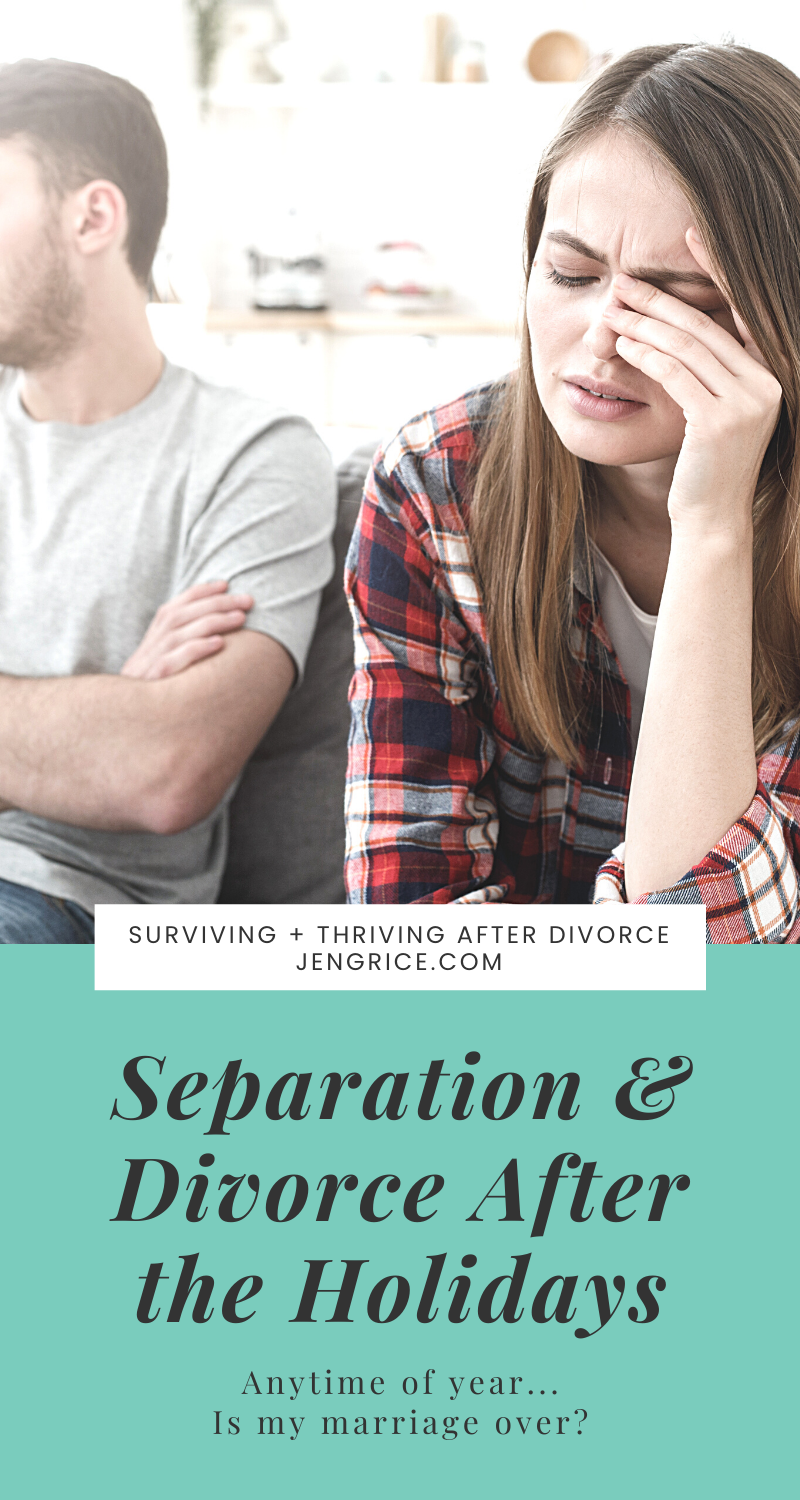 In the United States, January is the most active month for divorce filings. Many divorce lawyers, law professionals, and experts even call it, Divorce Month because of the increase in the number of people who start their divorce process in the month of January.

Why such a big spike in divorces filed in January? Because often during the holidays, one or both spouses try to hold things together for family or children – one last holiday together. Then, when the new year arrives, and probably the prospect of another year suffering in an unhappy, abusive or adulterous marriage, and they just can’t do it anymore. You have had enough! A new year often brings about changes in people’s lives – new beginnings.

As a Christian coach and writer who supports women through their unexpected and unwanted, yet often necessary divorce, I also see an increase in emails and website views in January asking me serious questions about the end of their marriage and divorce.

Today, I’d like to answer several of those questions.

The pain of staying married has to be worse than the fear of the unknown future after divorce.

Is my marriage over?

Women at the end of their marriage will email me, describing everything they’ve experienced over the last five, fifteen, or thirty-five years. They don’t want it to end but they don’t often see what else can be done. They’ve read all the marriage books, blogs, and even attended a few retreats.

Over the years his abuse has become worse and the kids are starting to pick up his disrespect for women. She just can’t take another day of his nastiness and cruelty. Or her husband has a girlfriend (that he’s not talking about) or has already left (to be with the other woman). Maybe physically he’s still there but he’s already left emotionally.

Things didn’t get this way overnight. And sometimes things are far past the point of the possibility of repair. You could be physically sick from all of the stress. Most times he doesn’t even care. Or, he’s already making plans about his future without you – to marry the other woman.

It’s impossible to reconcile a marriage with three people in it (and I don’t mean Jesus)! You can’t force someone to work on themselves (their control issues) or the marriage all by yourself. And seriously, this says a ton about your husband’s character and lack of empathy (he could be a narcissist) if he’s willing to invite another woman into your marriage.

I can’t tell you if your marriage is over, but I can tell you that you need to figure out what is the best option for you based on your circumstances. Always look at the bigger picture! It takes two people to get married, two people to keep the marriage going (on a healthy level), and only one person to take a sledgehammer to the entire thing… destroying it beyond repair.

What if he comes back?

Another question I hear often is, what if he comes back? What if he changes and is willing to fix the marriage? Lots of what-ifs…

The likelihood of that happening is 50-50. Many men do come back and want to reconcile the marriage, but more than likely it’s for the wrong reasons. And you really need to know the difference between true intentions and lies. Sometimes husbands hear from their lawyer that they’re going to have to pay half of their income to support you and/or your children – then someone will mention, “It’s cheaper to keep her!”

He’ll then make empty promises to change and go to counseling in order to get you back. Maybe he only wants to come back to control you – after realizing it will be hard to do that after divorce. The problem is he has motives and not a real desire to change for the better, for the marriage, or for God. I know this because if he had that desire to change, he would have done the work before it got to this point. Or he would do the work regardless if he got you back or not!

The fact of the matter he could have a hardened heart and is after what’s best for him without caring how this affects you. He doesn’t really want the marriage but he doesn’t want the consequences of divorce even more – that’s when divorcing could become dangerous.

Does God expect me to stay married?

There is usually more to this question, sharing her specific circumstances, like if she is unhappy or not being cared for. But beyond the feelings is the truth… what is the truth about your situation?

God expects you to stay married if both parties are each putting in the effort to love, honor, and cherish the other party. And who would want to divorce if that’s the case?

If one spouse has hardened their heart to the other, either through abuse (tyranny), adultery, or abandonment, God doesn’t expect you to stay married, just for the sake of the marriage. He cares more about people than He does any marriage. God doesn’t expect anyone to stay in a relationship that could do more harm than it does good.

You know it’s time to call it quits when you’re about to drown, attempting to hold both of you above the water. You realize that you may not be able to save the marriage, but at least you can save yourself. – Unknown

Married to someone with a hard heart?

The heart, in effect, is the whole person in all of his or her distinctive human activity as a thinking, planning, willing, feeling, worshiping, socially interacting being. And, of course, when the person is not living according to God’s will, it is the heart that is described as darkened, rebellious, callous, unfeeling, or idolatrous. It is within the heart that God works; hence the human heart may be tender and soft or as hard as stone. Hardness of heart thus describes a negative condition in which the person ignores, spurns, or rejects the gracious offer of God to be a part of his or her life.

In the Old Testament, God allowed divorce because of the hardness of hearts. This means someone could be a hearer of truth but they do not listen and put God’s Word into practice. Jesus came to set this person free, but they are not free. They just continue to freely sin.

We’re not talking about someone who struggles with their sin nature yet seeks God and His direction every day. A person with a softened heart seeks to grow in righteousness. A hard-hearted person does the opposite. They’re often looking for ways to get away with wrong-doings or to make foolish choices (without seeking God). And they may not even feel bad about it (lack of empathy for who they hurt) because their conscience is so seared by their habitual sin.

Side note: This also could be you, unable to have a softened heart because of the daily pain you feeling staying with someone so cruel. Sometimes you have to divorce so that you are able to be everything that God wants you to be – even someone with a soft heart.

Does God forgive me or still love me after divorce?

My video about this topic says it all…

What was the endpoint of your marriage? What reassurance do you gain knowing you were on the right path and will still be loved by God, even as a divorced person?

May God bless your divorce journey,

Share18
Tweet1.1K
Pin105
« No Empathy for the Single Mother (A Beaten-Down Traveler)
Narcissists Turn Everyone Against You (Even Your Own Family) »