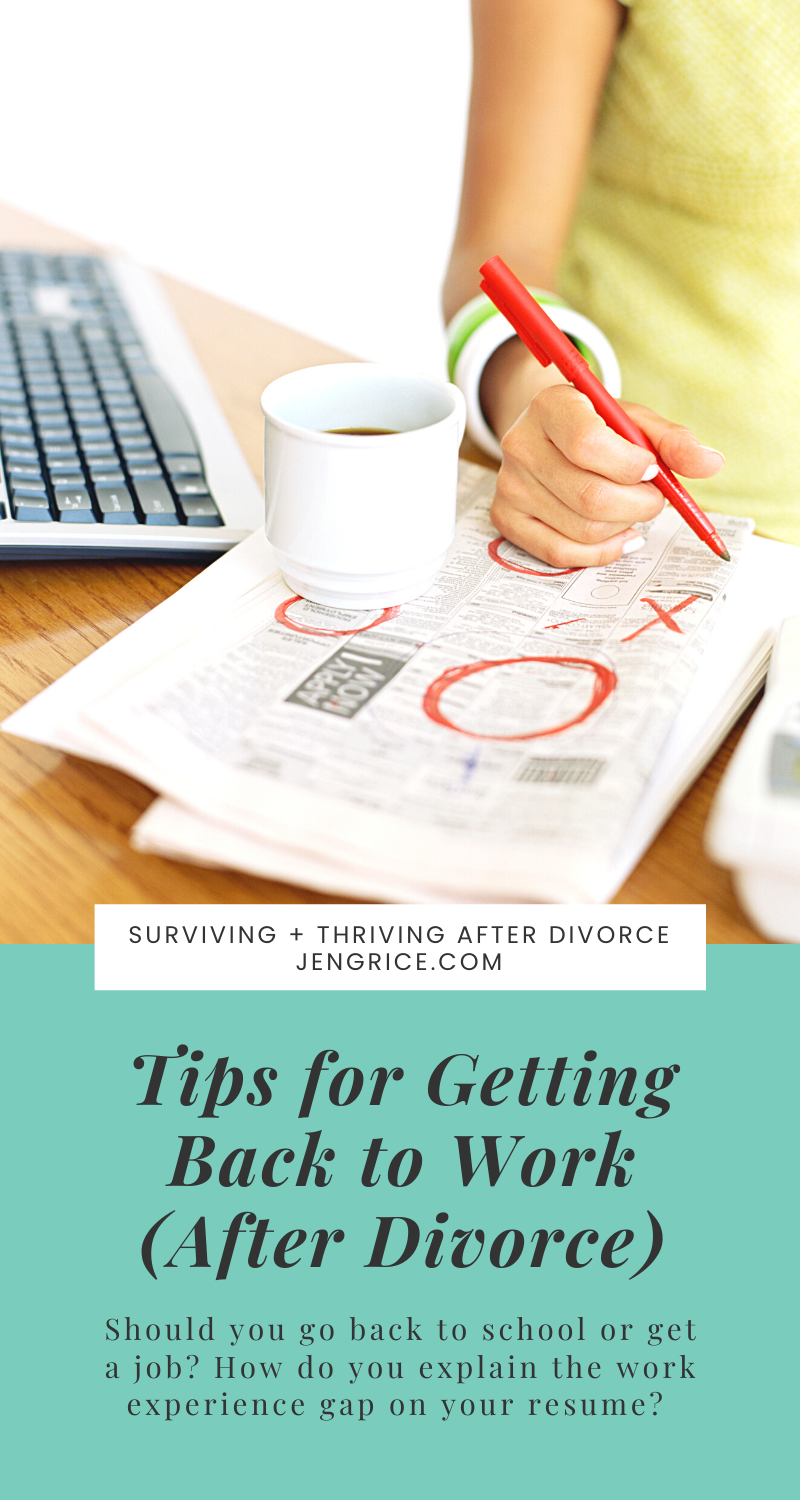 For many divorcing women, it’s extra stressful to think about getting a job outside the home after being a stay-at-home wife and mother for so many years. And honestly, when you’ve given up your life for your family for over a decade (or two), the thought of now having to start all over… feels downright unfair!

“The general belief that men get fleeced by their divorces while women get richer and live off the proceeds has long been due for exposure as a pernicious myth,” said Ruth Smallacombe, a family consultant at Flip. “In reality, women often suffer economic hardship when they divorce. In addition, the resentment caused by unfair financial settlements has many knock-on effects, damaging ongoing relationships with former spouses and a woman’s ability to move on with her life.” – (Source)

As hard as it is, you can survive this and go on to a thriving life after divorce!

It’s time for a fresh start and to explore new and exciting possibilities. Be brave in this new chapter filled with new beginnings after divorce. It may be a difficult transition, and you may be a bit nervous, but trust that everything will work out in the end.

I asked Twitter for their advice on returning to work after divorce, and here is one of the replies (used with permission):

How do I know which way to go?

It can be hard to decide what to do especially if it’s been a decade or two since your last job. And there will be no shortage of advice on what you should or shouldn’t do during this time.

Early on after my divorce, I heard that I would need to put my young son and teenage daughter (whom I was homeschooling) in school and get a “real job” like everyone else. There was this expectation that I would do what everyone else was doing. But I’d been working online for the last several years of my marriage, this was all I knew how to do. So I reached out to my network and started there when deciding what I should do… and I’m so glad that I did.

There is no right or wrong way to handle these next steps. And even though everyone will want to put you in their box, do what’s best for you and your household. Some women start back slowly by working part-time, some are able to get back into things full-time, and others find alternatives to create income or work from home in other ways.

Should I go back to school?

For me, I had already started my Bachelor’s degree before my divorce and it didn’t make any sense why I didn’t have it completed – even though I knew why. I felt it would look better if I had it completed rather than not. Plus, without the degree, I had nothing to show for all the money I already owed.

But as far as going on to get my Master’s, I’ll wait until I know that’s the right choice and it’s needed. I decided that one of two things need to happen before I’d go back to school again. Either I’ve paid off my other loans in full or I have a job that is willing to help pay for my degree. If one of those things doesn’t happen, then I’m content with the education that I already have.

Also, as I’ve been looking around at jobs, I’m realizing very few of the open entry-level jobs (at least in my area) require a degree. So if you’re looking to return to work without any degree, don’t feel that you have to go back to get a job after divorce, unless there is a specialized field you’d like to be in or you need continued education of some sort.

Just start by looking around at what you can do now and what you want to do before deciding if going to school is the best option. And you won’t be gaining experience, which most employers want, by getting more degrees – just more debt. Wait to see what you need before you decide to pay for it. Plus, you could be passing up on tuition assistance at a future job, by not waiting to see what you could get into now.

Be patient and trust God that He’ll give you the desires of your heart in His timing. I’ve worked several different jobs since my divorce (tutoring, selling Children’s books, and freelance writing) many of which I didn’t love while waiting for God to work things out and show me my purpose.

How do you find a job? And compete with other applicants?

When I was hired for my first “real job” (beyond fast food and temp agencies) in 1998 as the Circulation Manager at a large newspaper, I saw the job in the local newspaper, send in my resume and cover letter, was called in for an interview, and then got the job. I was one of only a small handful of people who applied. Since then, things have changed.

Now, we need to be more creative in our search, as in most locations there are more applicants than there are jobs available. An employer can expect hundreds of applications for one job. And from my research, most employers don’t even want to hire strangers off the street. They want to know who they’re hiring and if that person will stick around long-term for the job. That’s why it’s good to network and make connections even before you’re on the job hunt. Employers or their employees knowing you will go a lot farther than just your resume these days.

Also, be open-minded to a new career path that you may never have thought of before… as there is a lot more out there these days than ten and twenty years ago.

How to explain the gap in your resume.

This seems to make things more difficult. But instead of a chronological resume, focus more on your skills with a functional resume instead. Make sure you’re highlighting your skills and abilities rather than just showing the years you’ve done a certain job. Also, don’t forget about the experience you gained while at home. Did you help out at all at church, at your children’s school, or in the community? Were you part of the PTA/PTO or leading your child’s scout meetings? Volunteer work counts too!

In your cover letter, explain you’re returning to the workforce but don’t make apologies for the missing time as you don’t have to include your divorce or any children you may have. They may not want to know about your emotional baggage and honestly, they probably don’t care – at least not before you’re hired. They just want to fill the open position so just share how you have the skills they need and you’re the best person for the job, regardless of the time you spend staying home taking care of your family.

Also, be prepared for your interview so you’re not emotionally dumping anything onto the employer. If you’re worried you might do this, make an appointment with your counselor/therapist, divorce coach, or a close mentor beforehand who can help you unload so you’re prepared.

Don’t make any apologies for the gap in your resume when going back to work after divorce.
Click to Tweet

Craft your story and just apply.

You want to rehearse what you’ll say and how’ll you’ll explain things so as not to give too much detail. All you have to do is convince them to hire you based on your abilities. Remember, they may see you as a liability instead of an asset if you’re an oversharer (right there with you!). If anything, view each interview as practice if you do share too much the first couple times and don’t get hired. Next time you’ll do better!

Apply for as many jobs as you’re 60% or more qualified for. What? Yes, men do it all the time, even if women don’t. It’s called the gender confidence gap. Wome think we need to have all the boxes checked when you really just need to convince ourselves we have what it takes.

Women, we aren’t taking action often enough and that’s crucial. We don’t have to be perfect. Men are confident about their ability at 60%, but women don’t feel confident until they’ve checked off each item on the list. – (Source)

Don’t allow fear or the possibility of not getting the job from stopping you from applying. This could be your self-worth (which may take time to rebuild) talking when you’re not realizing that you do have what it takes to do the job, and do it well while learning the rest. Knowing your strengths and your weaknesses, and accepting them as who you currently are, is part of the divorce healing process. No more people-pleasing or painting that fake picture of perfection (as you did for your ex-narcissist) because you’re learning to be your authentic self – who God created you to be.

Dream and plan big! There are endless opportunities, even if it doesn’t feel like it. God goes before us and I’m walking with you!

Have you returned to work during or after your divorce? Any tips for others? What has helped you survive this transition? If not, what fears do you have about this part of the divorce journey?